“Ezra Meeker was born in Ohio on December 29, 1830. In 1852, at age 21, he set out with his young wife Eliza and infant son, following the Oregon Trail to Washington Territory. He later established the town of Puyallup, becoming the first mayor. Ezra became a successful hop grower and exporter. By 1880 he was the wealthiest man in the Pacific Northwest. An infestation of black aphids reversed his fortune and by 1894 he was penniless.

“Proud of his pioneer heritage and ever mindful of the sacrifices made by early settlers, he wrote about his experiences coming out West. To most people at the turn of the century, the Oregon Trail was becoming a faint memory. Ezra was alarmed that this historic route was rapidly disappearing beneath plow and pavement. He feared that soon all traces of the greatest human migration in history would be lost forever.

“In January 1906, Ezra Meeker, age 75, assembled a wagon, team of oxen, a driver, and his dog Jim. He set out to locate and mark the entire Oregon Trail to its source at Independence, Missouri. He chose to make the trip in this “…old fashioned style to perpetuate the identity of the Oregon Trail and honor the heroes who made it. The ox team was chosen as a typical reminder of pioneer days, as an effective instrument to attract attention, arouse enthusiasm, and secure aid to forward the work.”

“At each community, he would lecture and solicit donations for a local monument. In Boise, he visited each of the schools with his team and wagon. Ezra secured $100 from 1200* school children for the purchase of a granite monument. His travel expenses were paid through the sale of his book and the postcards (like these) of scenes taken along the way.

“His journey was successful. He placed 22 stones and markers. He extended his destination eastward to New York City and onto Washington, D.C. In 1907 he was received by the President of the United States. “No one showed greater enthusiasm for the work than did President Theodore Roosevelt.”

“Ezra would retrace the Trail several more times, once again by wagon in 1910-1912 with his oxen, Dave and Dandy; then by automobile in 1915. In 1924 he flew with pilot Oakley Kelley over the entire route in an open cockpit biplane, making the five month journey in just over 24 hours. Ezra was preparing for his final trail crossing in 1928, when he became ill and died just days before his 98th birthday.”

* Text on the monument (as appears above) says that 2777 school children were involved.

[The story above is printed on the back of postcards #1 and #2 below.] 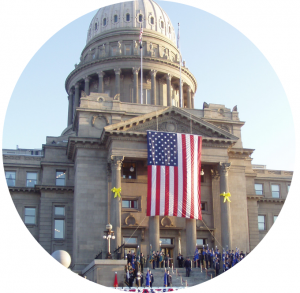